Biography of the Holy Father Francis 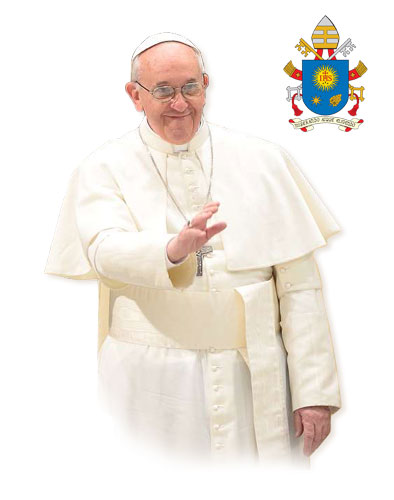 The first Pope of the Americas Jorge Mario Bergoglio hails from Argentina. The 76-year-old Jesuit Archbishop of Buenos Aires is a prominent figure throughout the continent, yet remains a simple pastor who is deeply loved by his diocese, throughout which he has traveled extensively on the underground and by bus during the 15 years of his episcopal ministry.

"My people are poor and I am one of them", he has said more than once, explaining his decision to live in an apartment and cook his own supper. He has always advised his priests to show mercy and apostolic courage and to keep their doors open to everyone. The worst thing that could happen to the Church, he has said on various occasions, "is what de Lubac called spiritual worldliness", which means, "being self-centred". And when he speaks of social justice, he calls people first of all to pick up the Catechism, to rediscover the Ten Commandments and the Beatitudes. His project is simple: if you follow Christ, you understand that "trampling upon a person's dignity is a serious sin".

Despite his reserved character — his official biography consists of only a few lines, at least until his appointment as Archbishop of Buenos Aires — he became a reference point because of the strong stances he took during the dramatic financial crisis that overwhelmed the country in 2001.

He was born in Buenos Aires on 17 December 1936, the son of Italian immigrants. His father Mario was an accountant employed by the railways and his mother Regina Sivori was a committed wife dedicated to raising their five children. He graduated as a chemical technician and then chose the path of the priesthood, entering the Diocesan Seminary of Villa Devoto. On 11 March 1958 he entered the novitiate of the Society of Jesus. He completed his studies of the humanities in Chile and returned to Argentina in 1963 to graduate with a degree in philosophy from the Colegio de San José in San Miguel. From 1964 to 1965 he taught literature and psychology at Immaculate Conception College in Santa Fé and in 1966 he taught the same subject at the Colegio del Salvatore in Buenos Aires. From 1967-70 he studied theology and obtained a degree from the Colegio of San José.

On 13 December 1969 he was ordained a priest by Archbishop Ramón José Castellano. He continued his training between 1970 and 1971 at the University of Alcalá de Henares, Spain, and on 22 April 1973 made his final profession with the Jesuits. Back in Argentina, he was novice master at Villa Barilari, San Miguel; professor at the Faculty of Theology of San Miguel; consultor to the Province of the Society of Jesus and also Rector of the Colegio Máximo of the Faculty of Philosophy and Theology.

On 31 July 1973 he was appointed Provincial of the Jesuits in Argentina, an office he held for six years. He then resumed his work in the university sector and from 1980 to 1986 served once again as Rector of the Colegio de San José, as well as parish priest, again in San Miguel. In March 1986 he went to Germany to finish his doctoral thesis; his superiors then sent him to the Colegio del Salvador in Buenos Aires and next to the Jesuit Church in the city of Córdoba as spiritual director and confessor.

It was Cardinal Antonio Quarracino, Archbishop of Buenos Aires, who wanted him as a close collaborator. So, on 20 May 1992 Pope John Paul II appointed him titular Bishop of Auca and Auxiliary of Buenos Aires. On 27 May he received episcopal ordination from the Cardinal in the cathedral. He chose as his episcopal motto, miserando atque eligendo, and on his coat of arms inserted the ihs, the symbol of the Society of Jesus.

He gave his first interview as a bishop to a parish newsletter, Estrellita de Belém. He was immediately appointed Episcopal Vicar of the Flores district and on 21 December 1993 was also entrusted with the office of Vicar General of the Archdiocese. Thus it came as no surprise when, on 3 June 1997, he was raised to the dignity of Coadjutor Archbishop of Buenos Aires. Not even nine months had passed when, upon the death of Cardinal Quarracino, he succeeded him on 28 February 1998, as Archbishop, Primate of Argentina and Ordinary for Eastern-rite faithful in Argentina who have no Ordinary of their own rite.

Three years later at the Consistory of 21 February 2001, John Paul ii created him Cardinal, assigning him the title of San Roberto Bellarmino. He asked the faithful not to come to Rome to celebrate his creation as Cardinal but rather to donate to the poor what they would have spent on the journey. As Grand Chancellor of the Catholic University of Argentina, he is the author of the books: Meditaciones para religiosos (1982), Reflexiones sobre la vida apostólica(1992) and Reflexiones de esperanza (1992).

In October 2001 he was appointed General Relator to the 10th Ordinary General Assembly of the Synod of Bishops on the Episcopal Ministry. This task was entrusted to him at the last minute to replace Cardinal Edward Michael Egan, Archbishop of New York, who was obliged to stay in his homeland because of the terrorist attacks on September 11th. At the Synod he placed particular emphasis on "the prophetic mission of the bishop", his being a "prophet of justice", his duty to "preach ceaselessly" the social doctrine of the Church and also "to express an authentic judgement in matters of faith and morals".

All the while Cardinal Bergoglio was becoming ever more popular in Latin America. Despite this, he never relaxed his sober approach or his strict lifestyle, which some have defined as almost "ascetic". In this spirit of poverty, he declined to be appointed as President of the Argentine Bishops' Conference in 2002, but three years later he was elected and then, in 2008, reconfirmed for a further three-year mandate. Meanwhile in April 2005 he took part in the Conclave in which Pope Benedict XVI was elected.

As Archbishop of Buenos Aires — a diocese with more than three million inhabitants — he conceived of a missionary project based on communion and evangelization. He had four main goals: open and brotherly communities, an informed laity playing a lead role, evangelization efforts addressed to every inhabitant of the city, and assistance to the poor and the sick. He aimed to reevangelize Buenos Aires, "taking into account those who live there, its structure and its history". He asked priests and lay people to work together. In September 2009 he launched the solidarity campaign for the bicentenary of the Independence of the country. Two hundred charitable agencies are to be set up by 2016. And on a continental scale, he expected much from the impact of the message of the Aparecida Conference in 2007, to the point of describing it as the "Evangelii Nuntiandi of Latin America".