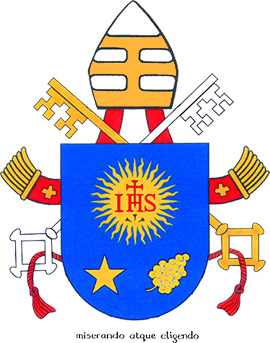 Pope Francis' papal coat of arms are the same that he used as bishop. The shield has a bright blue background, at the center top of which is a yellow radiant sun with the IHS christogram representing Jesus (it is also the Jesuit logo). The IHS monogram, as well as a cross that pierces the H, are in red with three black nails directly under them. Under that, to the left, is a star representing Mary, Mother of Christ and the Church. To the right of the star is a spikenard flower representing Joseph, Patron of the Universal Church. With these symbols the Pope demonstrates his love for the Holy Family.

What distinguishes his coat of arms as pontiff is that, instead of the wide-brimmed, red cardinal's hat atop the shield, it is now crowned by the papal tiara and crossed keys.

His motto—"miserando atque eligendo" (because he saw him through the eyes of mercy and chose him)—is taken from the Venerable Bede's homily on the Gospel account of the call of Matthew. It holds special meaning for the Pope because—when he was only 17-years-old, after going to confession on the Feast of St. Matthew in 1953—he perceived God's mercy in his life and felt the call to the priesthood, following the example of St. Ignatius of Loyola.

Description courtesy of the US Conference of Catholic Bishops and used with permission. Original Content.